When it comes to games and sports, there are two types of people in the world — those who play based on what they know without reading the rules and those who read the rules back to front to ensure they know how to play and how to win.

Knowing the official foosball rules goes beyond knowing what you can and can't do. It can also teach you the best way to play the game, whether for casual fun or competition. This guide will teach you everything you need about foosball, from table dimensions to the official rules.

There are different foosball tables, from regulation to standard and even tabletop versions for tight spaces. Regardless of your table type, it is bound to provide hours of fun.

The most common tables are about 2.5-by-5 feet long, which translates to 30-by-60 inches. Standard tables are ideal for personal game rooms as four people can play at a time. Tabletop versions are the smallest foosball tables and are perfect for smaller rooms.

If you want to play in foosball tournaments, you need a table that meets the International Table Soccer Federation's (ITSF) specifications. Regulation tables are typically 29 inches wide, 55 inches long and 36 inches high.

Standard and regulation foosball tables are meant to reach the belly button of a player, and you should be able to play without bending over to grasp the handles. Some recreational tables come with shorter or adjustable bases to allow children the ability to play.

If you have a tall table and your child wants to play, try using an exercise step or small step ladder. This should give them the height needed to see the table and reach the handles, making your foosball table a good investment and fun time for everyone in the family! 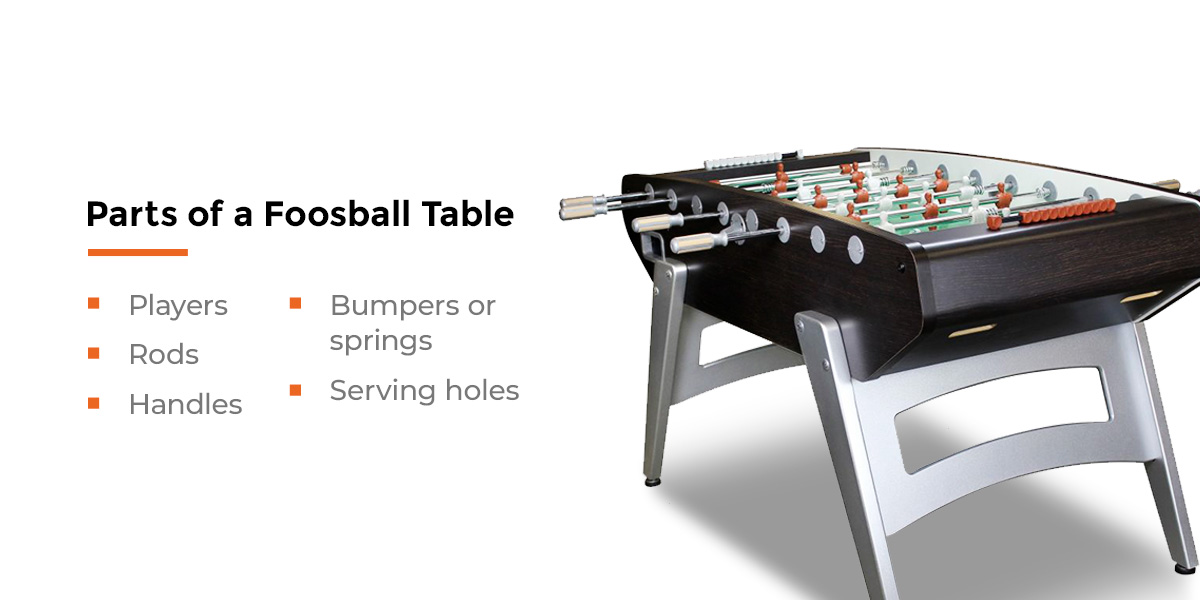 Parts of a Foosball Table

Before you start playing foosball, you need to know the different parts of the table. Understanding each piece and how they work can help give you the edge in your next foosball game — friendly or professional: 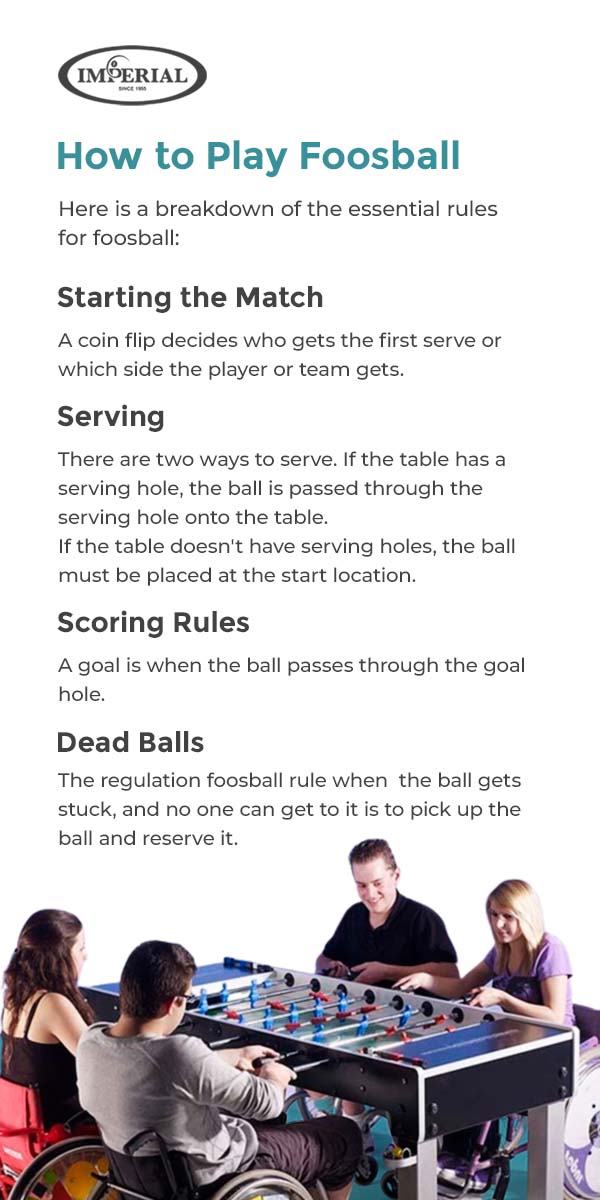 How to Play Foosball

You play foosball by controlling the four rods attached to the figures. The aim is to score more points than your opponents. How you maneuver and control your players is dictated by the ITSF rules that govern everything from serving to how you can move your players.

Here is a breakdown of the essential rules for foosball:

Flip the coin and let it land on the ground after each person calls — no extra hand flipping.

If the table doesn't have serving holes, the ball must be placed at the start location. This is typically at the mid-foot location of the serving player's figures. Players can't use their hands to touch the ball or the field once the ball is set for service. You must also confirm the opposing player is ready to play before putting the ball into service.

Once a person scores a goal, the foosball rules about serving change. The person who got scored on (not the person who just scored) gets to serve the ball next. This gives the losing team a chance to catch up.

The foosball scoring rules are relatively simple. A goal is when the ball passes through the goal hole. If your goalie hits the ball into your goal, it is considered an own goal. Even if the ball bounces back out, it is still considered a goal. However, if the ball is served and goes into the goal without anyone touching it, official foosball rules state that it is not a goal.

The first person to five wins that round. Most professional games play best out of five or three. Sometimes, a single round is played, and the first person to seven wins. Remember that you should be switching back and forth between who serves the ball based on who got scored against last.

Sometimes the ball gets stuck, and no one can get to it. In these situations, giving the ball a little push or shaking the table is illegal to get the ball back into play. The regulation foosball rule in this situation is to pick up the ball and reserve it. The last person to serve is the person who will re-serve the ball in response to a dead zone. 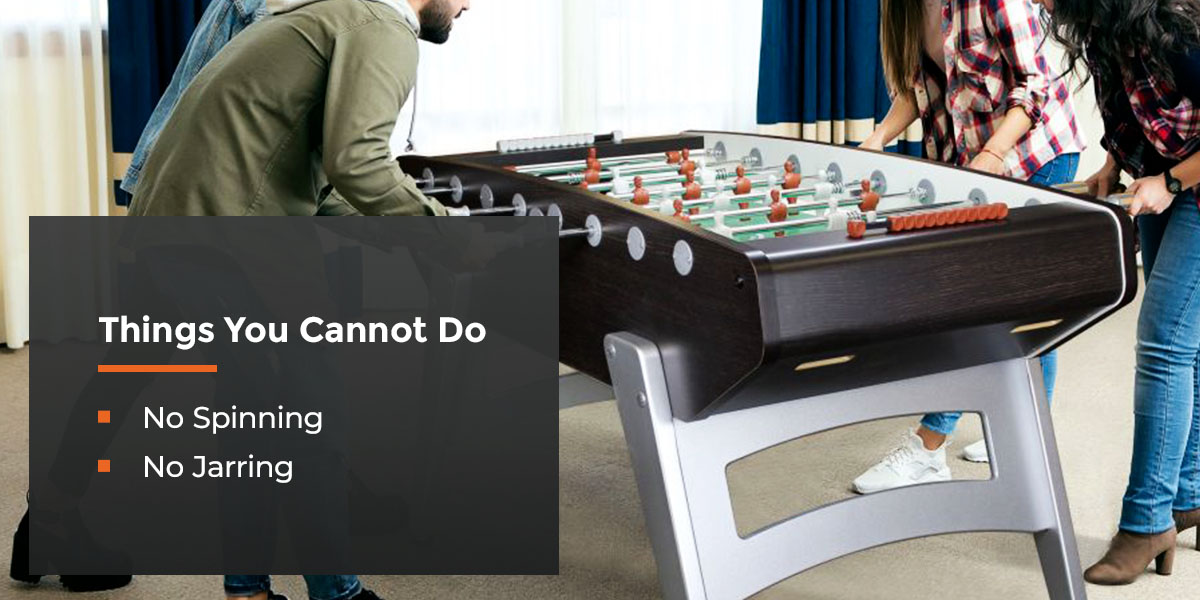 Things You Cannot Do

Knowing how to start the game and score is just the start. You also need what you can't do in a foosball game.

The main rule of foosball that everyone breaks is no spinning. That means you cannot make any players do a 360-degree rotation. You can turn your rod up to 90 degrees so that the feet face the sky. This is as far as you should need to go for shooting.

If you're turning your man to reach the ball, it's okay to go more than 90 degrees, but as soon as you do a complete flip, you've violated the spinning rule.

You are not allowed to jar, push, rock or otherwise attempt to move the ball by adjusting the table, even if the ball is stuck. This is called jarring and is sometimes done to free the ball but is more often used to throw off an opponent. It's illegal in foosball for that second reason, so keep that in mind.

Jarring includes banging your rod against the walls of the table, as well. If it jolts the table, it's not allowed. 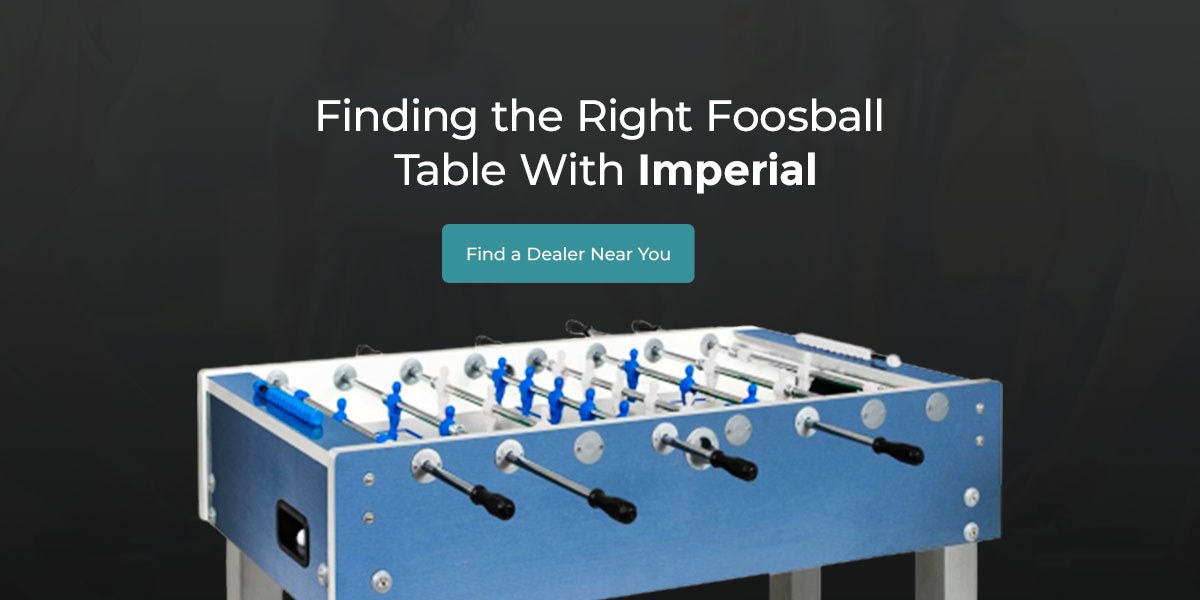 Now that you know how to play foosball according to the official foosball rules, it is time to get practicing. At Imperial, we stock a range of foosball tables. Our models come in different colors, leg shapes and even sizes, so they fit your space perfectly. Some even have folding legs for easy storage.

We even have outdoor foosball tables if you have limited space indoors. Are you ready to make your game room more fun? Find a dealer near you today!

← PREVIOUS
Using Quality Equipment Will Enhance Your Love of Pool
NEXT →
9 Game Room Ideas for Creating the Ultimate Game Room in Your Home
Related Posts
Categories
Recent posts
My Build An Order
Last Added Items
Go to Build An Order
You have no items in your build an order list.